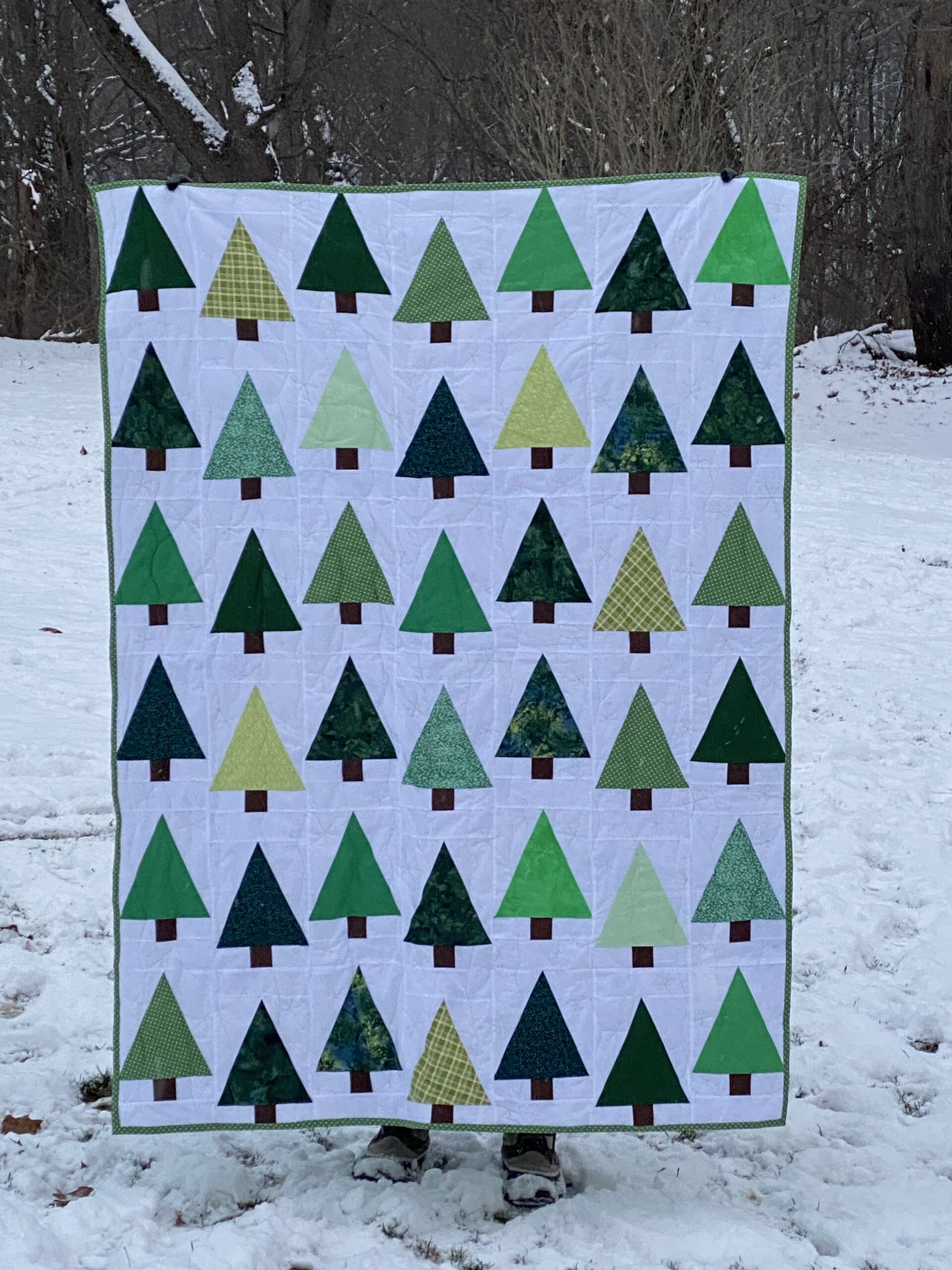 We finally got some snow! Good news for the local ski resorts and even better news for those who love to photograph quilts in the snow.

This Christmas tree quilt is actually one of the first quilts that I started working on this year, and it was the last one that I finished, on December 30 at 11:30pm. Not bad!

I used the free Evergreen Quilt pattern from Cluck Cluck Sew, which I cut and pieced while listening to lectures for my anatomy and physiology class. This was probably not the best for concentration and learning. But I managed to pass the class, so it all worked out. (At the beginning of this year I was telling everyone that I wanted to change careers and become a nurse, but taking this pre-requisite course showed me that doing so while also working a different job and raising children would be extremely challenging, more challenging than I am willing to take on at this moment of my life. When would I quilt?!)

I finished the Evergreen quilt top in February and then stashed it away and decided to quilt it later (which turned out to be the end of December…). This quilt is a wedding present for my friend who is getting married in April of this year, but with the crazy pandemic, I scrapped my idea of embroidering their wedding date and went with the make year instead. I don’t want to jinx anything.

Using my walking foot, I quilted squiggly vertical lines and then attempted some FMQ “snowflakes” that were more like asterisks. I ended up putting the walking foot back on and finishing the snowflakes with that, which was much easier.

I used a green polka dot fabric for the backing, which I also wanted to use as the binding… but I cut into it while trying to trim the batting. UGH!! One really needs to trim the batting before quilting and not quilt to the edge of the quilt top when using this method, as Allison of Cluck Cluck Sew has shown me. But! I scrolled through the comments and found some tips for repairs when this does happen. Fortunately the cuts were tiny and the repairs were easy. Thank you to my guild, i.e., the comments sections of quilt blogs.

As I was basting and quilting this, I regretted that I hadn’t had my revelation about using the iron earlier, because the piecing could be a bit neater. I really love this quilt pattern though, it’s a great way to use up scraps, so I think I will make it again someday, maybe as a wall hanging or table runner? Check out this adorable version that Allison made this past Christmas.

Despite its flaws, I hope that my dear friends Michelle and Justin snuggle under it for years to come. I used a wool batting so it will be nice and warm. I’m going to send it to them early, but after I wash it and hopefully that yellow mark comes off. (Facepalm)

Sadly I did not finish my personal Christmas quilt in time for actual Christmas, but I did finish it on Dec. 29.

I bought a fat quarter bundle of Maureen Cracknell’s Cozy and Magical fabric collection, along with some coordinating solids and plaid prints. I also had a few things in my fabric bin that I added to the fabric pull.

I didn’t have a plan for this fabric when I bought it, but I landed on Suzy Quilts’ Reverse Sawtooth Star Pattern. I made a test block while I was in the middle of the Holiday Party Quilt Sew Along, and then forced myself to put it away until that quilt was finished. I like having many quilts going at once, but the number was getting out of control at this point.

This quilt is basically just an explosion of sawtooth stars, so I decided to chain piece all of them at once. This proved to be a bit daunting. Soooo many flying geese, a very unruly flock!

The Reverse Sawtooth Star pattern is supposed to resemble a checkerboard, alternating between light stars and dark stars. I did that and also attempted to do a red to gold to pink diagonal ombré with blues scattered throughout… there’s a lot going on here. But I like it. Since it ended up being so big, I decided to just do straight line quilting: horizontal, vertical, and on both diagonals through the stars. I did boxy outline quilting on the border.

I had a bunch of scraps leftover, so I decided to piece a scrappy binding and hand sew it on to the back. I did this while watching the Hawkeye series with Brad in those dark boring days between Christmas and New Years. He usually watches TV at night while I’m quilting, so it was nice to spend a few nights sewing and binge watching Hawkeye, which I really liked. He thinks I’m the only person who has only seen Black Panther and Hawkeye and none of the other Marvel shows or movies. I’m ok with that.

I also managed to finish the audiobook of Middlemarch while working on this quilt, so when I look at the prints of the quilt I can hear the narrator and I envision the scenes from the novel.

So, that’s it! Quilts 11 and 12. The new year has already brought lots of surprises. I’m already working on the next quilt, which is a tshirt quilt for Brad. I hope he likes it!