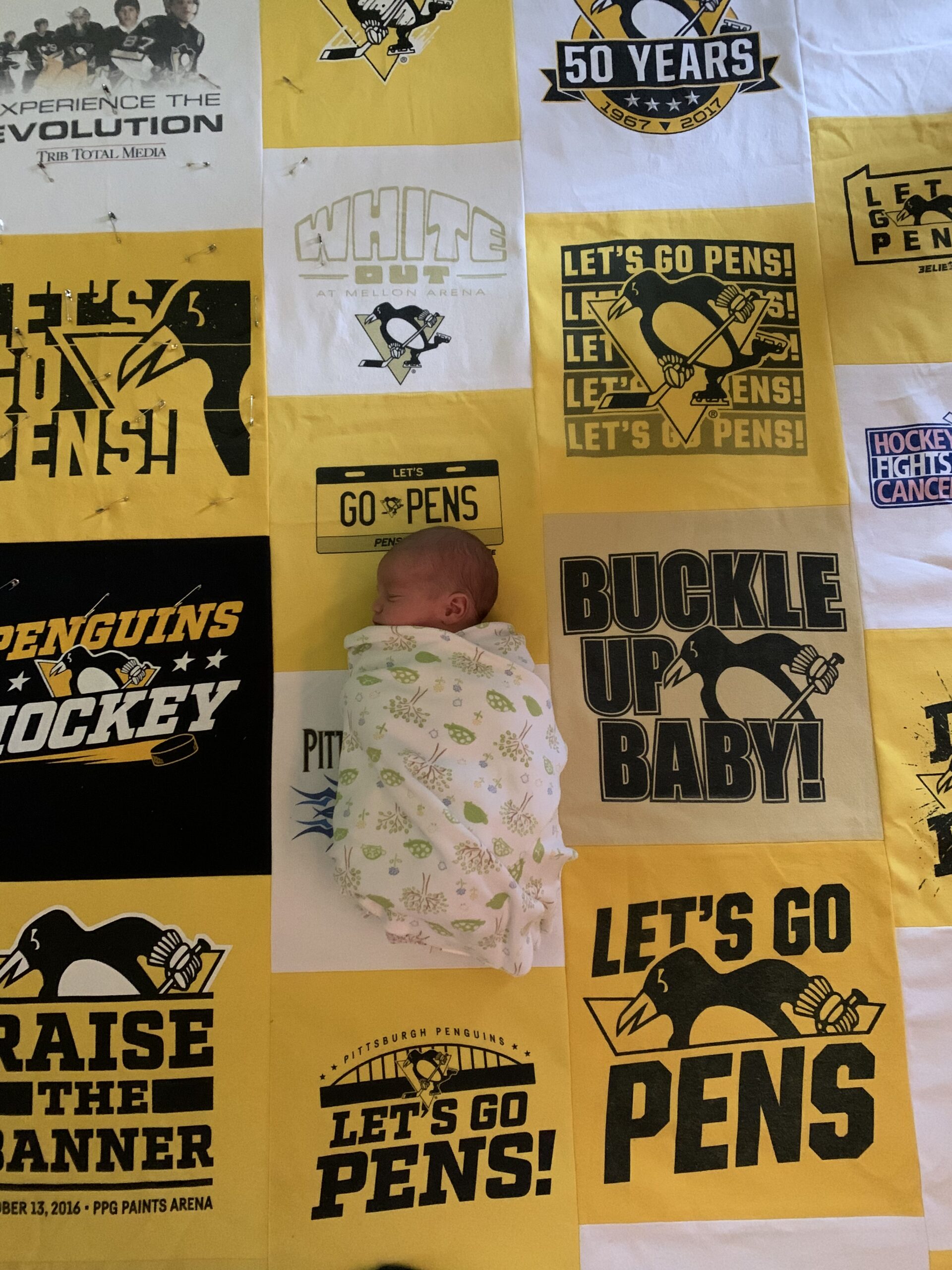 It’s the most wonderful time of the year! Hockey playoffs, that is. Staying up too late watching the teams on the west coast, watching highlights at breakfast with the kids in the morning, debating whether taking a four month old baby to a Penguins playoff game is a good idea (it’s not!)… it’s springtime in Pittsburgh.

I have always loved hockey. My dad took me and my siblings to see the now defunct Cleveland Lumberjacks when we were kids, I played with my cousins on my grandma’s lake in Michigan, and in college I joined a D-league rec team that played at 1am on Wednesdays with a bunch of people that could barely skate. So you can imagine how delighted I was back in 2007 when the guy I had just started dating told me that he had season tickets to the Pittsburgh Penguins games and invited me to go. Reader, I married him… three years (and many hockey games) later.

The Penguins have consistently been in the playoffs for many (16?) years, and Brad has attended many many playoff games. (I know, I know! You thought this was a quilting blog, why am I going on and on about hockey? I’m getting there.) At many (all?) of these games, the fans would receive a t-shirt. Years of attending playoff games led to amassing many, many, MANY t-shirts. At one point he went through them and removed the duplicate designs: 46 t-shirts still remained! I can’t remember whether he or I suggested that I turn those into a t-shirt quilt, but that is what I did.

I began this project on January 2nd, 12 days away from my due date for our third child. “I can finish one more quilt before I have this baby,” thought I, naively.

The next day I started to feel bad. Covid bad. The day after that I tested positive and went into our (finished) basement to isolate from the rest of my family, who somehow managed to not get sick. I took my rotary cutter, mat, and the pile of t-shirts with me.

At first I just slept as much as possible, but eventually felt well enough to iron on interfacing and cut shirts between naps and reading about how to deliver a baby alone in the Encyclopedia of Country Living, just in case. “Maybe I can still finish this quilt before the baby comes,” I coughed.

With a mask on, I crept upstairs to grab my sewing machine and pins, then proceeded to set up the least ergonomic sewing station imaginable at the coffee table in the basement. It was uncomfortable, hunched over with my gigantic belly in the way, but I managed to sew the rows together. My husband ran out to Joann’s for a curbside pickup of some official Pittsburgh Penguins flannel that I ordered online to use for the backing. I pieced that, then I finished the top. ”My first two babies were a week late, so I still have time to baste, quilt, and bind this quilt before I go into labor,” I said to my reflection in the basement bathroom mirror, probably delirious with fever and insanity from being alone in the basement for so long.

In the wee hours of the morning of day 10 in the basement, my last day of isolation and one day before my due date, I went into labor. “I guess I’m not finishing your quilt before the baby comes,” I said to my husband between contractions in the hospital (so glad I didn’t need to use any of that solo home birth info from the Encyclopedia!).

After our baby girl was born and I was settled into my negatively-pressurized mother-baby recovery room in the covid section of the hospital, he asked me if I wanted him to bring back anything from home when he returned the next day. ”My sewing machine!” I (mostly) joked.

Two days after that, we were on our way home! Then two days after that (according to the time stamp on the picture below), I was getting ready to baste this quilt. Not really sure what I was thinking, pushing the heavy rug out of the way a mere four days postpartum… I probably wasn’t.

My photo time stamps tell me that I didn’t actually baste the thing until 9 days postpartum, with some help from my neonate.

Normally at this point in the quilting process, I figure out how far apart I can safely quilt straight lines, sew those lines at full bunny speed, and then call the thing done… but I got a crazy idea in my head that I would quilt the markings of a hockey rink instead. This involved downloading and reading portions of the official NHL rule book…

…and getting my rulers back out to mark the lines and circles and make sure everything was to scale. Initially I thought I would quilt these lines by hand, but the Juki can handle 12wt thread, so I was only forced to embroider the little dots in the face off circles by hand.

My trusty time stamps tell me that I finished this quilt in mid-March, and I finally got it outside for a photo on Mother’s Day. Thank you to my wonderful mother in law for taking this picture.

They say that to win the Stanley Cup, you need both grit and finesse, as well as a little bit of luck. There will be adversity, but you must tackle it head on. Never give up. It’s an epic journey, but only the strongest and most determined make it to the end. Well, I might say the same thing about quilting. Again, I would be mostly joking.