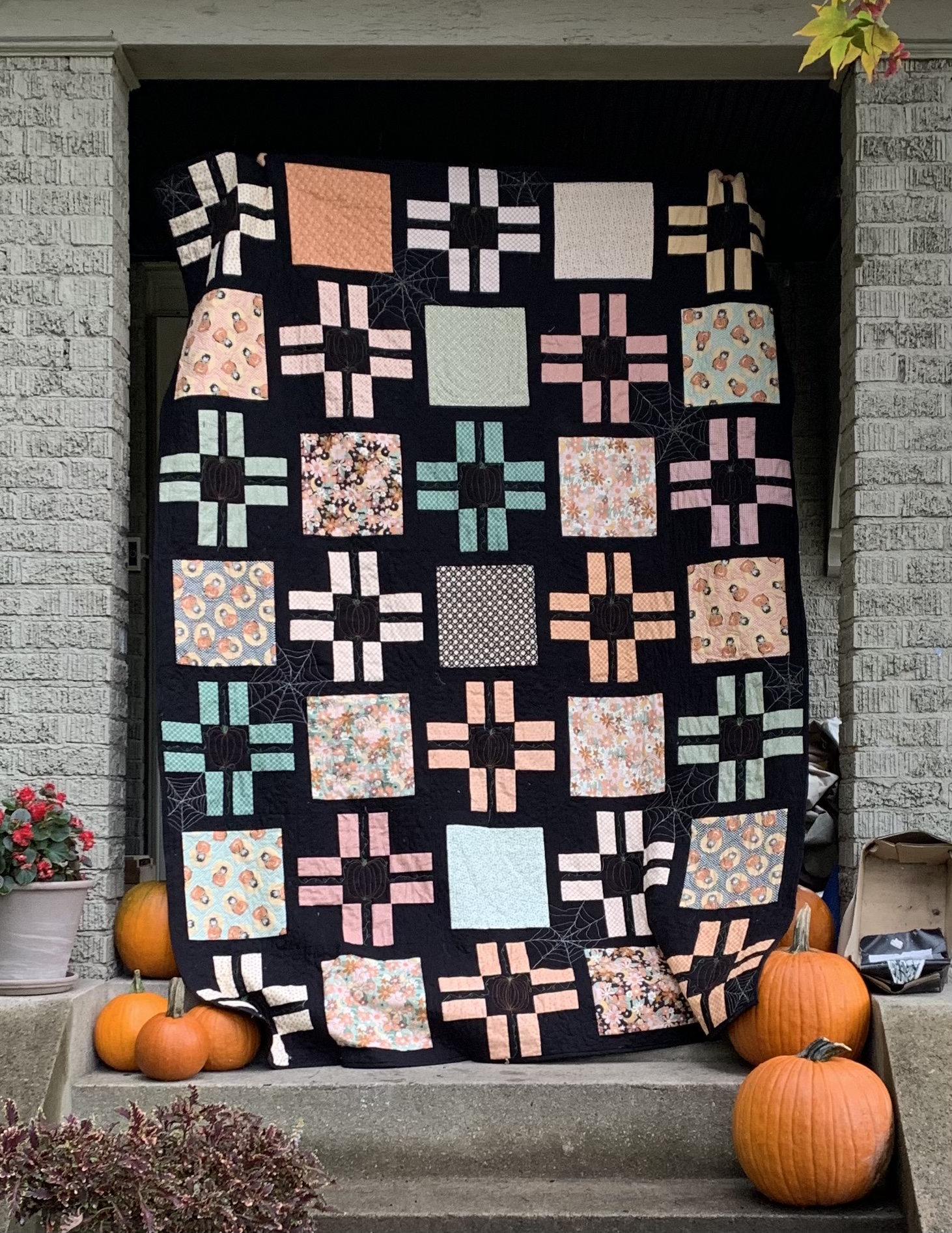 Remember my trip to the Cherry Pit in Sevierville TN? In addition to the scrap bag and Songbook layer cake, I also picked up a layer cake and a few random fat quarters from the Moda Kitty Corn collection. I thought that the prints were so cute, the kitten with the shawl? Or bow? posing with a carved pumpkin? Adorbs. (I am too allergic to cats to become a cat lady, buying kitten fabric is the next best thing.) “I’ll make a Halloween quilt!” I thought.

Amanda and I have previously discussed why not to make a Halloween quilt. Halloween is just a day, and right after that day is done, we get rid of the spiders and bats and spooky things and move on to Thanksgiving (or if you’re me last year during our first pandemic fall, you move straight to Christmas, because you need all the cheer). One could put out a Halloween quilt at the beginning of October, but that’s only a month! We were discussing how much we loved the Cluck Cluck Sew bat quilt pattern but didn’t want to commit to a Halloween quilt.

But… I bought the Kitty Corn layer cake anyway, despite the very good arguments against Halloween quilts.

I do love bats, and I considered using that pattern for this quilt, but my goal of SPEED SPEED SPEED this year led me to this free layer cake pattern from the Fat Quarter Shop. As promised, this “shortcut” pattern came together super quickly. I thought that I might get it done at the beginning of October, as I started working on it right after I finished the King, but many things got in the way: work, quarantining/virtual school facilitation, and Halloween costume sewing.

Since the pattern was so simple, and there was a bit of open space between the blocks, I thought it would be a good chance to practice some FMQ. I picked up some orange and green thread when I was buying some material for Helen’s Halloween costume (she is going to be a vampire and wanted a purple cape). I found some tutorials online for making spiders and webs, and pumpkins are one of the few things that I can doodle, so I just improvised those in the centers of the “custard” blocks.

I put the spiders on the print blocks, which ended up being good because they looked a little weird, but the black thread blends in and the spiders aren’t too noticeable. I was going to put webs all over the rest of the black background fabric, but then I decided to go with a “less is more” approach and just did a few webs and then stippling with black thread for the rest of the background.

The quilting is not close to perfect, but I’m still pretty happy with how this turned out. I like the black background fabric, the colors and prints really pop.

This was the first time I used an 80/20 cotton/poly batting because I wanted a bit more loft, but it really didn’t puff up much. In fact, I can’t tell a difference between this and 100% cotton, so maybe 80/20 is my new go-to, as it is less pricey and was quite easy to work with.

I wanted to be economical with the back, so I used a couple of leftover 10 inch squares from the layer cake, some of the extra fat quarters from the collection that I had grabbed, some squares from the scrap bag, scraps from my stash, and then pieced together some of the trimmings into squares. It’s quite scrappy and the colors aren’t a perfect match, but it works.

I folded and pulled the backing fabric onto the front for the binding, and managed not to cut into it while trimming the batting, so that was a win.

This quilt is now draped over our couch and I love it. It’s going to stay there until at least Thanksgiving. It’s not too obviously a Halloween quilt, aside from the jack o lanterns and candy corn… so I’m going to call quilt number 9 my Halloweenish quilt.